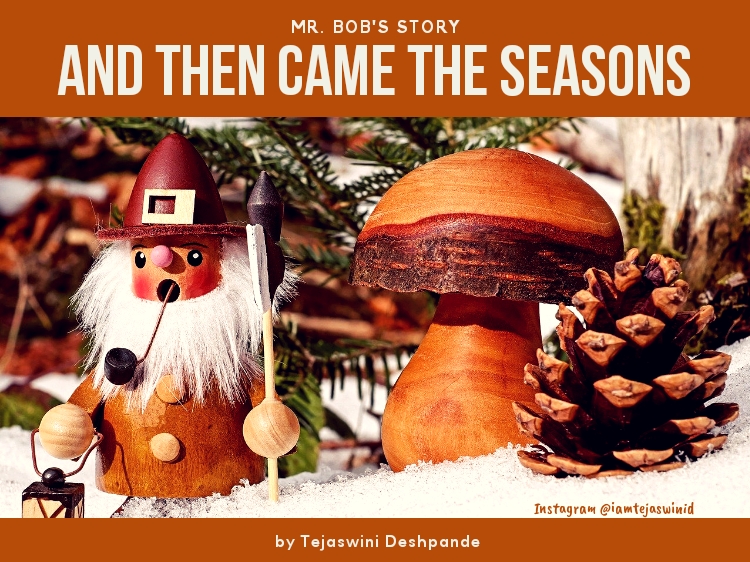 And Then Came the Seasons

Sometimes hot, sometimes cold
Sometimes rain, never could be told
This was the story of everyday on Earth
Uncertain when to wear a sweater, or when could the umbrella be sold!

That day, the weather was hot
And the night was warm
The rain had visited a day back or two
And the air was without any notable special charm

So Mr. Bob wished and prayed for a simple magic
Can the days be arranged in a fair simple logic
If it can be told when how would be the weather
The crops could grow, and nothing would be tragic

Three days later, there was a knock on his door
It was somewhere at the end of October
His family was done with their dinner And all their work for the day was over

Who could be the one – he, she or it
Or may be an animal, with or without fur
Mr. Bob went with a fear and a little uncomfortable shiver
And to his surprise found a guest – fair Mr. Winter

So winter was there, the guest of honor
With all his tools and all his gear
And generous enough to warn the family
To open their box full of winter wear

Slowly it was November
And winter grew more
And then came the days of deep fog
It was December, the end of the year

When Mr. Bob went to the farm or town
Everytime his hands would shiver
His lovely old Grandpa and Grandma
Were so down with a bad ugly fever

The pleasantness of the winter had already gone
And the harshness rubbed all the winter fame
Though he served the guest very well
Mr. Winter was strong, never could be tame

It was January,
May be twelve or fifteen
And again Mr. Bob was praying God
Let the hot weather begin

The prayers reached the God
His wills and what he desired
He hid nothing, his heart was pure
And those were the days of truth, so God also cared

The God came to him
And whispered in his ear
You like the change
But the extreme you fear!

So I give you all – one by one
Divide it equally, without any fun
Summer and rains and winter you will have
Just four months each, don’t you run

So this is how seasons were born
Between them equally, the year was torn
Now whenever it got harsh, in any of them
Mr. Bob already knew, everything will be okay on one fine morn!

2 thoughts on “And Then Came the Seasons”